Something we've been thinking a lot about lately is the way that printers/writers/artists/media types cross-pollinate between the internet and print media. We thought we'd pass on some of the exciting things we found--like this super-cool chapbook by K. Abigail Walthausen, published by Fractious Press. 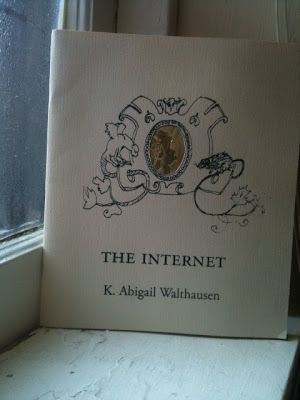 On each page of the poem, there's a long, hand-cut rectangular hole--it's like one line of that page’s poem was removed, and a line from the next page’s poem is drifting up to replace it. These holes are erasures (or they're pretending to be erasures), but they also create a different kind of path through the book than we're used to, where you get to re-read the same line in different places. 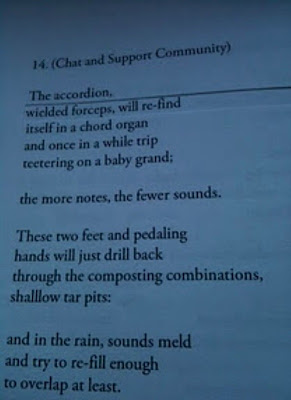 The book’s colophon says that “K. Abigail Walthausen wrote The Internet to test her faith in things.” The press’s website adds:
The Internet is a series of poems, connected both physically and thematically, that explores digression of thought. The (actual) Internet, its hypertext, its menus, its links have supported the aimless navigations which act in caricature of the human brain's unexpected associations of ideas. In trying to learn about specific words and terms, the resulting answers sometimes broaden, sometimes dampen the spectrum of connotations. Meandering searches divert to unfamiliar reframings and reflect back again on familiar territory. Words can fit exactly where one expects them, as in a search for a famous quote or a plagiarized phrase, or find new meanings in diverse and surprising jargons.
The idea that someone could "test [their] faith in things" by trying to simulate the experience of “linked” digital reading in a printed book is exciting: a lot of the theoretical writing about print culture emphasizes how "stable" and "closed" printed books look: tidy pages, indexes, etc. Some people (like Walter Ong) have even pointed out that printed books seem so "complete" that it can sometimes be hard to imagine there's information about their subject that they don't include or acknowledge. That The Internet is full of holes is the whole point: there's no final product--there's only the process of reading, changing things (ideas, understandings, and actual arrangements of words) as you go.

Follow @shantyquarian on Twitter. Tag your tweets with #shantyQ to get published on an old-fashioned press on the ice.
Posted by mc at 8:27 AM

About the Letterpress Shanty

The Letterpress Shanty is home to the communally authored broadside, The Shantyquarian, collaboratively sourced from online submissions, and printed on an antique letterpress.

We invite you to view the letterpress process at Northern Spark. We encourage everyone to tweet submissions to #shantyQ. More...

Inspired by White Night Festivals from around the world (otherwise known as Nuit Blanche), Northern Spark is a city-wide, all-night arts festival held in Minneapolis Minnesota.

About the Art Shanty Projects